Welcome to an exquisite evening event - welcome to our unique crime dinner!

Guests can feast, play along and guess, because in addition to a delicious 3-course menu, there is a tricky criminal case to solve.

What happens in the course of a delicate menu, mysterious confusions can be guessed.

The audience is allowed to help in the search for the culprit. The mixture of murderous entertainment and a fine meal served by our chef and his crew is sure to leave only enthusiastic guests.

Book directly online with our partner 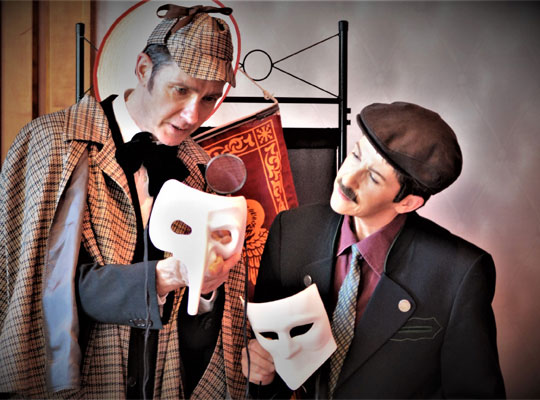 Sherlock Holmes and the Swabian Gondolier

Venice! City of masks, gondolas and palazzi. Sherlock Holmes finds himself in upscale, yet chatty Swabian company for the annual regatta here in the romantic lagoon city.

However, the stay turns out quite differently than expected. A mysterious murder case overshadows the scene. Even before you, dear guests, are served the appetizer of your delicious menu, you become eyewitnesses to a devious crime.

Sherlock Holmes can hardly believe his luck. In the best investigative mood, he sets to work. The fact that the murder victim is a Swabian gondolier does not make the case any easier. Your help, esteemed audience, is of course of utmost importance, after all you are witnesses at the scene of the crime, as people present you are basically suspects and have to convince the master detective of your innocence by your help.

Is there probably a connection between the cruel deed and the peculiar circumstance that the gondolier comes from Swabia? Dr. Watson, himself a native Swabian, is in any case firmly convinced of this.

We are in the Louvre in Paris in 1958. Valérie La Voyante, indispensable for many years in the Louvre as an art historian, has invited to a celebratory reception.

Et voilà... You are part of this illustrious, high-caliber and art-aware company when La Voyante suddenly drops the bombshell: The centerpiece of the Louvre, the world-famous "Mona Lisa", is not quite real. A fake! This shocking news raises many questions for everyone present. Where is the real one? Who has it in their possession and is it intact?

Unfortunately, not everyone present can experience the solution to these burning questions, because shortly after the unveiling, a dead body is found! There is a cold-blooded and determined murderer in the Louvre - but who is it? Unfortunately, the Paris police are more than "prevented".

So it's up to you to interpret the clues and unmask the killer. An exciting journey into the past and a tricky murder case await you! 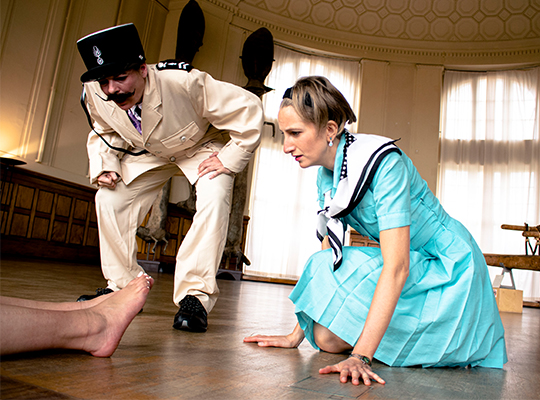 A thrillingly gruesome crime play with a Swabian twist.

The absolute highlight in the tranquil Swabian village is the annual theater performance of the cultural association. This year, due to its great success, the play "Faust I" by Goethe is to be performed again. But for this the leading role must be newly filled in a public casting. The board of the association has cordially invited the population to participate.

Linda Bergmann, the well-known actress of Mephista, is also present for support.

The casting goes surprisingly well, until a sudden death disrupts the relaxed evening. Are criminal machinations behind it? Who can still trust whom?

The so flawless cooperation of the cultural association and the small Swabian community starts to crack and threatens to break apart.

Marlene Dieterle, not only chairwoman of the cultural association, but also inspector and head of the murder squad, takes over the investigation.

Eventually, all the threads come together:

What happened last night at the debauched farewell party of the former Faust actor?

Could it have been a case of confusing reality with the game?

The case is elaborately reconstructed and in the process some of the guests come under suspicion. Inspector Dieterle urgently asks for help in solving the mysterious case.

Yes, you read correctly, the famous master detective Sherlock Holmes and yours truly, Dr. Watson, have made their way to Swabia.

Admittedly, not entirely voluntarily. But our genius could not turn down the invitation of an old acquaintance, the Baroness von Zuckerberg, to a gala dinner.

So here we are, dining at the very time in the adjoining room of the restaurant where you are enjoying a delicious 3-course meal this evening. Fleeing from his tablemate, the endlessly chattering Swabian baroness, the detective narrowly misses the supposed murder of the hostess' husband, the Baron von Zuckerberg.

Well, his health was no longer the best. But to fall so suddenly forward into the swabian pocket soup is not the fine English way to die, even in Swabia. For Sherlock Holmes, however, the hitherto deadly boring evening is saved.

A dialect whodunit is in the offing, and an extremely tricky case at that, because the results of the investigation seem to rule out any influence of poison. The questioning of the witnesses, the forensic doctor and some of the dinner guests makes many an innocent lamb in the room appear suspicious. Eager and in high spirits, the famous detective cranks up his little gray cells.

Swabian shrewdness" is already taking hold, but the master is not fooled by a false house builder in such a short time. For him, of course, the solution to the case is soon obvious. As always, however, he leaves us in the dark for a while before the murderer is convicted in a virtuoso manner.

But maybe you will soon have the solution at hand as well, since you have a say in the matter this evening.

Enjoy an evening with a menu and thrilling crime suspense, the latter served by your investigator team Basile/Herrmann.